The political strategist, writer and dedicated mental health campaigner speaks to Mental Health Today ahead of receiving an honorary fellowship from the Royal College of Psychiatrists on Monday. 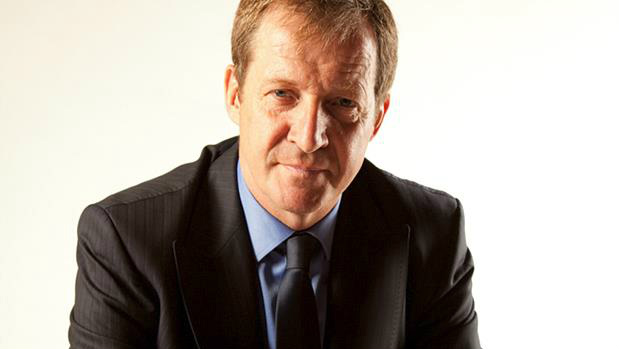 "When my brother was diagnosed with schizophrenia, I was still in my teens," Alastair tells Mental Health Today. "Donald was just a couple of years older than me. He was in the army at the time and he was admitted to a psychiatric military hospital near Southampton. It was one of the most horrific moments of my life. I’m not being critical of my dad because we were living in different times, but he had to get back to work. I don’t remember anyone telling me, this is how you look after someone who has been diagnosed with schizophrenia. You kind of just make it up as you go along."

Now 60, our interviewee's understanding of mental health has come a long way in the intervening years. Indeed, he is now almost as well know for campaigning and writing on mental health as he is for his role in supporting Tony Blair and New Labour to three general election victories, or his current work raging against the pitfalls of Brexit.

"At the end of the call, the woman said, 'OK, if you can keep them there calm, we’ll have an ambulance there in two hours'. I thought, 'good God, that’s how bad it’s got'."

This afternoon Alastair will be awarded an honoury fellowship from the Royal College of Psychiatrists. He was one of the first public figures to speak candidly about his own mental health, including addiction and break down in the 1980s, followed by burnout in government and a depression diagnosis.

"My mental health now is actually not bad. I’ve had an on-off relationship with different forms of medication. I’ve never really historically liked being on medication but I’ve found medication now that I feel comfortable with and I take every day. I still get down and gets bouts of depression but I’ve not had an 'absolutely chronic one' for a fair time now."

Initially, like many others, Alastair used alcohol and work to numb him from what he now recognises were depressive episodes, but he was affected by psychotic episodes at the time he was drinking. "Drinking was partly a self-medicating thing. Once I sorted the drinking out, I thought everything was hunky-dory. We had our first child a couple of years later and the career started picking up and everything seemed to be going OK. Then the depression started coming in again, intermittently and then more regularly."

"I certainly wouldn’t recommend depression to anyone, but it’s shaped me. It’s made me more resilient, more empathetic and more understanding of other people’s issues."

"I’ve never not talked about in that I’ve never said, 'I’m not going to talk about that', but around about the time of the turn of the century I started to talk about things intermittently. Nowadays, I talk about it because I want to be part of a movement, a campaign, that wins the argument that parity between mental health and physical health needs to mean parity. When health services and commissioners are looking to trim budgets, mental health always comes to the front of the queue: that has to stop. There has to be the same sort of outcry about cuts to mental health services as there are when there are cuts to cancer or children’s services."

Alastair paints a picture of modern day service delivery to illustrate his point. Psychosis can sometime be as distressing to witness as it is to experience and the night before our interview, Alastair recognised it in a stranger outside a Brexit meeting at a school near the family home. "There was a guy running down the road across from where we were, just wearing a pair of jeans. He had no shoes on, no socks or top on, and I could see straight away he was psychotic."

"I positioned myself so he had to at least stop for a minute. I talked to him and calmed him down a little bit, but he was in a total psychotic meltdown. He was salivating, hearing things, seeing things... he had blood on his nose. I asked if he would mind if I called an ambulance for him. It took several minutes to get through and several more to go through the questionnaire. I understand why they have to do it but when you’re trying to keep someone close to you who is in the middle of a psychotic meltdown, it’s very difficult. And then at the end of the call, the woman said, "OK, if you can keep them there calm, we’ll have an ambulance there in two hours. I thought, good God, that’s how bad it’s got."

"In the end, a doctor came out from the school the meeting was at and he said to call the police as it would be quicker. The police have become the front line on mental health. I don’t think anyone who works in mental health services feels that the country is moving in the right direction in terms of service provision."

"I’ve worked with Prime Ministers and I know how hard the job is so I don’t want to be over-critical in a partisan kind of way. I’m not going to question Theresa May's motivations at all. When she stands outside Downing Street and says those are her priorities, I’m going to take that at face value. I’m not somebody who thinks that everything has to be done by the state. I think things like mental health first aid training in schools are excellent. But they’re only part of a bigger picture and it’s that picture that I’m failing to see at the moment."

Statistics back up the anecdotal evidence. Over the weekend, figures were published highlighting that psychiatrists' vacancies have doubled in the last four years. Alastair is backing the Royal College of Psychiatrists' 'Choose Psychiatry' campaign.

"Winning the battle for de-stigmatisation is fine, but only if it’s accompanied by services and support that people can rely on when they need them and whey they can admit they need them... I’m not undermining or diminishing anything that doctors or surgeons in physical illness do, but in a way they have so much more to go on. Psychiatry is that very interesting mix of medical and more broadly human understanding of experience. The need for good psychological support service and clever young people going into psychiatry is greater than ever. I've been very lucky to have good psychiatrists at different times in my life; the guy who has been helping me for the last 12 years or so and the guy who helped me when I cracked up in Glasgow in the 80s."

"The good psychiatrists understand that it’s not just about the patient. These things ripple out to families and others too. You might say, 'well, you’re quite an intelligent person, you can work things out for yourself,' but actually, you need someone slightly removed who helps you to work out the impact that you’re having on other people and the need to have strategies for that as well."

"I’ve seen with my own depressions the impacts that mental illness can have on, say, Fiona [Alastair's wife] or my kids. It’s very difficult. Why do we assume that kids can just adapt to that? The Kidstime Foundation are a charity who deal with that issue and it’s a lot of children that are growing up with mentally ill parents. Why do we assume that they can cope?"

"With Donald, when he was feeling OK, he would go off the rails and he would end up back in hospital. The psychiatrists would often explain that one of the hardest things about schizophrenia diagnosis is explaining what schizophrenia is not. Why should we expect families to be equipped to do that?"

In speaking out, Alastair provides a reminder to other families that these problems are being encountered in houses up and down the land. The issues can't always be resolved by or within the family unit alone. Psychiatry, among other support channels, can play a role. Another message he is keen to share, though, involves "changing the lens" around how mental illness is seen.

"There was a time when Stephen Fry was interviewed and he was asked what he would do if he were invited to push a button for his bipolar to be gone. He said he wasn't sure he’d press it. When I think about my brother and if he would have been better off without schizophrenia, for sure, but he did still manage to have a good life with it. I might rail at the fact that anti-psychotics can take twenty years off your life – that’s a different thing – but they did help him have a better quality of life while he was alive. He was able to have a good life despite the schizophrenia."

"Another way of looking at mental health: some of the greatest figures in history, whether it’s Lincoln or Churchill, or Marie Curie or Florence Nightingale, or Charles Darwin… we can go on and on about the most amazing people in history who were mentally ill. Lincoln’s law partner wrote a book about him that started with the line ‘melancholy dripped from him with every step he took’. It’s like, well there’s a very good description of someone who’s depressed!" There are all these people who, if they were defined purely by their mental illness, would never have achieved anything."