The government will share its finalised plans for mental health education later this month, possibly as early as next week. Lessons will become compulsory next year. 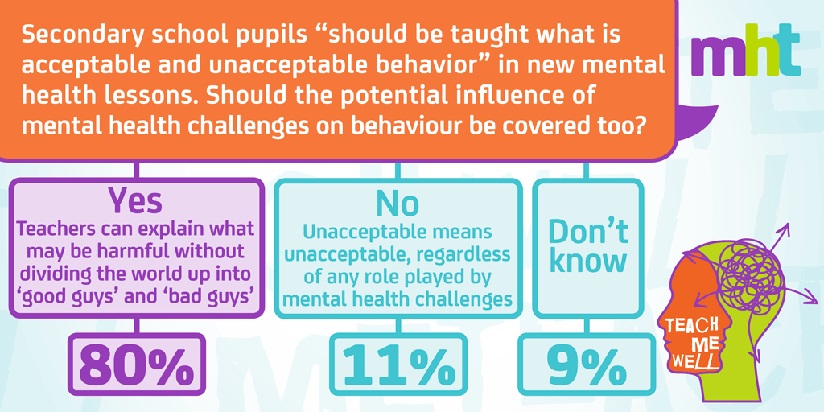 The government looks set to face questions over the credibility of its planned mental health lessons when they are unveiled later this month.

"We need to humanise the full ugly, messy spectrum of mental health and try to ask children why they are doing things instead of asking them to stop."

In their current guise, teachers will be required to judge and call out "unacceptable behaviour", while they will also be instructed to instill non-judgmental values in their students.

Widespread public concern exists that children with mood disorders will be left isolated by an approach that threatens to present a simplistic, sanitised concept of what mental health challenges look like, extensive polling conducted by Mental Health Today has found.

The Department for Education's draft plans for mental health lessons say children "should be taught what is acceptable and unacceptable behaviour."

Elsewhere in the same document it is acknowledged that "effective teaching should aim to reduce stigma attached to health issues, in particular those to do with mental wellbeing."

New survey results published today reveal public anger that the government has so far failed to recognise that behaviour can and is often influenced by mental health challenges, and give teachers the guidance and support they need.

80 percent answered: "Teachers can explain what may be harmful without dividing the world up into good guys and bad guys."

The survey ran from October until January and received over 1,200 responses.

Results have been shared with the Department for Education.

The Department has told Mental Health Today it will share finalised plans later this month, and admitted that it has not tested - and will not be testing - its latest revisions externally before they are released.

Updated relationships education - featuring mental health content for the first time - is set to arrive in all English and Welsh schools in September 2020.

However, mental health 'support teams' won't be made available to any schools until 2023, a full three years later.

In the interim, the government announced yesterday it would trial mindfulness exercises, relaxation techniques and breathing exercises in 370 schools.

"It’s crucial schools teach children how to approach mental health with empathy and compassion, in and out of the classroom," journalist Lucy Middleton, who has received CBT (cognitive behavioural therapy) for depression and anxiety, told Mental Health Today.

"Those suffering need to know they are not ‘bad’, ‘wrong’ or ‘crazy', - and it is equally important that their peers and teachers do not write them off as such."

"We need to humanise the full ugly, messy spectrum of mental health and try to ask children why they are doing things instead of asking them to stop."

"The topic made teachers anxious," she writes in Mental Health Today.

"They felt the need to protect children from exposure to people with mental health problems and even from information about the topic."

"They also believed they lacked the necessary expertise, worried that such discussions were outside their remit, and were anxious about parents’ reactions."

The Department for Education have been invited to comment on how they've processed responses to their consultation but have yet to answer Mental Health Today's request.

The finalised proposals will be voted upon in parliament in April.