With the government placing an increased emphasis on prevention, education has a pivotal role to play. 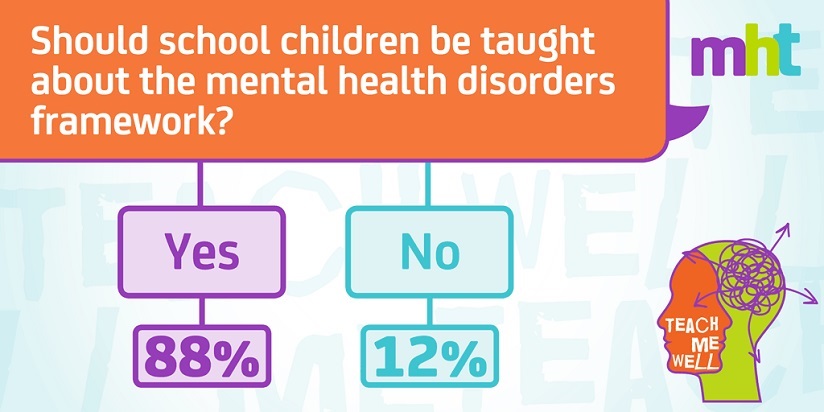 "Discussing disorders in school represents an opportunity for children to be informed about what is known and not known about conditions, and for certain myths or misconceptions to be confronted."

The government has pledged to roll out mental health lessons to all schools from September 2020 as part of a redesigned national curriculum. The content of these lessons is yet to be agreed and ideas will be debated in parliament this spring.

88 percent of MHT readers (almost nine in ten) have given their backing to improving both mental health literacy and outcomes by introducing children to an overview of mental health disorders at school.

The polling results follow the recent release of data from NHS Digital showing that one in eight children and young people aged between five and 19 are living with a mental health disorder.

What would be taught?

Two disorders frameworks are used within psychiatry to inform diagnoses. One is found within the World Health Organisation’s International Classification of Diseases (ICD); the other is the Diagnostic and Statistical Manual (DSM), published by the American Psychiatric Association.

Hundreds of disorders are listed and defined across both ‘manuals’. There are some differences in how certain disorders are described or understood across the two publications.

Both the ICD and DSM acknowledge that disorders can manifest as a result of social and psychological influences, as well as biological. It is sometimes falsely assumed that mental health disorders surface purely as a result of the genes you have inherited.

Discussing disorders in school represents an opportunity for children to be informed about what is known and not known about conditions, for certain myths or misconceptions to be confronted, and for support routes to be facilitated.

"Children are taught physical health studies, social studies and even religious studies," suicide survivor Jessica Murray, now 23, told Mental Health Today. "Where is the awareness on mental health? This would have hugely benefited me as a child in school."

Effective mental health education could foster empathy for others living with mental health conditions and support children to understand how disorders can be treated or managed, clinically and non-clinically.

GPs are able to diagnose and prescribe medication or talking therapies for a small band of common conditions, such as anxiety and depression, but the Royal College of Psychiatrists say that only specialist consultant psychiatrists are qualified to diagnose the majority of mental health disorders.

“There is a mental health crisis in our classrooms,” Matt Blow, Policy Manager at YoungMinds, told Mental Health Today. “Children and young people today face a huge range of pressures, from exam stress to cyberbullying to finding a job when they finish education – and growing numbers of young people are reaching out for support.”

“That’s why it’s crucial that all young people are taught about mental health from a young age, learning emotional literacy, what to do if they’re struggling to cope, and how to cope with the pressures of the online world. But while dedicated lessons on mental health are an important step forward, schools also need the resources and recognition to prioritise wellbeing in everything they do. That’s why it’s crucial that the current review of the Ofsted inspection framework leads to a greater focus on wellbeing.”

“The focus should be on increasing the number of well trained counsellors, and reducing some of the causes of mental illness which are in our control, such as child poverty and exam factory pressures.”

Psychologist, lecturer and author Lucy Johnstone said: “Mental health education in schools is potentially useful but it all depends on what is taught. The huge rise in distress in young people is not best seen as an outbreak of 'disorders' but as an understandable response to the stresses they face.”

“Rather than applying labels, which can imply that that the individual is somehow failing to cope, it would be better to identify young people's very real family, social and educational pressures and encourage them to think collectively about coping strategies and mutual support.”

MHT received over 1,200 survey responses to its Teach Me Well survey between 22 October 2018 and 2 January 2019. It has shared its findings with the government through its ongoing consultation on mental health curriculum content.

Updated curriculum plans are set to be shared by the Government’s Department for Education by the end of February.

MHT will publish further results from its polling over the coming weeks, ahead of the national curriculum plan being debated and finalised in parliament in the spring.

How does this story make you feel? Share your views using #MHTchat and join us on Twitter from 12pm UK time on Wednesday, January 9th.