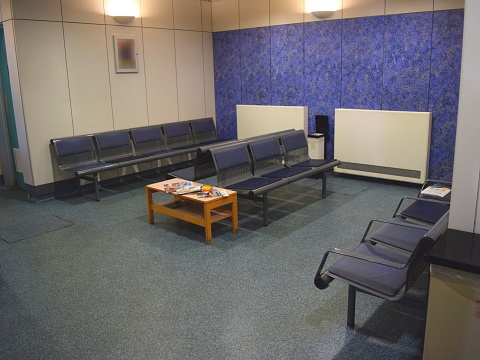 Hospitals are more than ‘just a building’; from the basic issues of infection control on, they are (mostly) designed to take account of their function. Today, it is widely accepted that this is particularly important for psychiatric hospitals, and inpatient facilities in particular. People stay in psychiatric hospitals for longer than the average patient – often moving between different parts of the hospital at different time – at a time when they are, by definition, extremely vulnerable. “One thing that has been pointed out to us is that you are in a very distraught state when you come in, and clarity of space is important,” says Cath Lake, architect and board member of the Design in Mental Health Network. “Things need to be in logical places, where they make sense and flow well; rooms need to be in the right place.”

“The attempt to give the architecture a curative role goes back to the 17th century,” says Harriet Richardson, an architectural historian and researcher at University College London’s Bartlett School of Architecture. She points out that since Thomas Hook’s Bethlem hospital (which she considers the first purpose-built hospital of the modern era) it’s been important to have some kind of green space and access to nature. “It was very much about having an open area. Many had productive gardens as well.”

That is one concept that hasn’t gone away; in fact there is now a considerable body of research pointing to the importance of green space for patient (and also staff) wellbeing. The evidence isn’t overwhelming, but there’s a broad feeling that access to outdoor space and the opportunity to be ‘in nature’ (which might just be looking at plants) is beneficial. In 2012, the Forestry Commission produced a practice guide on ‘Greenspace design for health and well-being’, with introductions from Sir Muir Gray and Derek Feeley, urging NHS facilities to ‘strive to make greater use of existing outdoor spaces by connecting them with the built environment’; and a number of mental health facilities have explored these opportunities very creatively.

“That emphasis on green space is one reason why hospitals were historically sited on the edge of urban areas,” Richardson adds. “The idea of green space and gardens was only lost as the hospitals became engulfed by urban growth.”

There are other, quite complicated issues when it comes to siting. This is partly about where the facility is in relation to other services the patients might need to access, and partly about the relationship with the surrounding community. Professor Sarah Curtis of Durham University has found in previous research that patients had strong feelings about being located, for instance, on a waste site near a busy highway – it conveys a very distinct message about their own standing in society. So does a very visible high fence around the secure unit, which gives the distinct impression of a prison (and therefore fuels the fears of the neighbours as well).

If the idea of green space has persisted since the early days of hospital design, one thing that has shifted hugely is the concept of the ward. In mental health care there a general feeling that the ward has a function as a therapeutic space: though, interestingly, at least one study has pointed out that the data on this is inconclusive.

However, Lake points out, it’s not just the ward that needs to be considered. “A lot of it is about space that patients or service users will use, and how the building and the facilities management are supported without too much impact on the patient environment.” Many patients are acutely troubled by disruption, so it’s important that the building is designed in a way that means they are not disturbed by people going into the kitchen, or coming and going to do general maintenance. “You need lots of light, and choice, not just one day space,” she suggests. “Spaces for one-to-on consultation are always important and so is space for personal belongings – some people are coming in for quite a long time and need somewhere to put their things safely.”

It’s also important to be somewhere which is comfortable and attractive. “The quality of interior design, furniture and lighting communicates a sense of value and communicates self worth for the patient and a sense of a professional caring ethos for the care provider,” Shaw explains. However, this can have some complexities too. “That homely aspect of the ward can be very helpful but it may cause some difficulties with moving back into the community,” says Curtis. “That was a point that came up quite often in our research; people feel a certain emotional attachment and the hospital is almost symbolic of a stable point and a refuge, as well as somewhere to get better. Trying to reflect that in the way that space is managed is quite challenging.”

Another challenge is balancing the need for security versus that for privacy. People need to feel safe in their own space; they may also need to be protected from their own impulses to damage themselves and others; and other people – including staff – need to be safe too.

That brings in a whole set of complex, overlapping concerns. Shaw breaks it down into physical security (boundaries, walls, doors and locks); operational security (procedures, checks, and sequences of activity); and relational security (being aware of who and what is around you). Bedrooms, he argues, need to be designed in a way that helps people start their recovery journey from the immediate private space – the bed – to the world outside their door, using ‘thresholds’ such as lowered ceilings, steps and doors which are set back (all devices, incidentally, which are used in luxury hotel design).

For practitioners, there’s also the whole issue of hospitals’ function as a place to work. There is quite a lot of research into how hospital design affects staff satisfaction and retention rates, with a general conclusion that (unsurprisingly) practitioners prefer to work in well-designed hospitals where everything is to hand, and that they too like good lighting and access to green space. “Staff need the right space to do the jobs they need to do, and also space on the ward, even if it’s just a small room, where they can get away and have a break,” Lake points out. “that allows them to be better supported. And patients will pick up on that and benefit too.”

None of this is particularly surprising – though it also makes the hospital, obviously, a much nicer place to work; but alongside this ‘softer’ emphasis, there is an increasingly sophisticated body of work on how hospital design can itself counter infection. Overall, infection control has become something that microbiologists encourage building into the whole planning, design and building stages of a new hospital project.

“A bit of flexibility in the space is important,” Curtis says. “Ideas change and people need to change.” “One of the things we are finding now, with reduced beds, is there is higher acuity in a lot of general units so we are having to design to be much more flexible,” Lake adds.

Shaw takes this further. “The tendency to be very specific to current need Is counterproductive. You need to ‘future gaze’ a bit. The building will have to serve for the next 30 years or more and needs will change in the future; for example, we know frailty is going to become an increasing issue, not only with patients but with staff as well.” He also argues that there is a huge potential for different sorts of technology in delivering mental healthcare. Pharmacy and drug management is starting to be done through robotic equipment – but that is not all. ‘Digital connectivity’, monitoring tools and radio/biometric tracking could be linked into a patient’s care plan – not to restrict them but to enable them to have more access to the outside world.

“This kind of work is fun, and it’s also challenging,” Lake concludes. “You can see a benefit in some of the projects you do, and the impact on people’s lives. Fundamentally, the design needs to provide somewhere where people feel safe and comforted when they’re going through a very difficult time. As long as staff are also safe and able to do their job, you’ve done it well.”