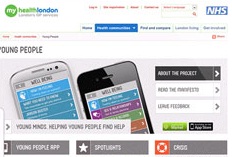 A new mobile app dedicated to providing easy to access information about health issues to young people has been launched.

Well Happy is an app designed for people aged 12-25 in London who are concerned about mental and sexual health, drugs, alcohol and smoking.

The app also allows users to quickly and easily access support networks which exist in the capital.

Positive feedback from young people
Katherine Cormack, who helped develop the app and has experience of mental health problems herself, said: "All the feedback has been really positive. I've had emails from young people across the city. We have had a huge amount of interest across the UK and Europe. People have been asking if it's going to become bigger and include other cities."

"It's been nice to go to someone who's not from a health background and for them to understand it straight away. They've said really glowing things about it."

Embarrassed to talk to doctors or teachers
Cormack, who worked with the NHS, the charity Young Minds and social enterprise initiative Living Well to build the app, said there was a clear gap in the market for clear and concise information that would be easily available to young people.

"A lot of the time, people are told they should talk to their doctor or a teacher and often they're too embarrassed, don't have the right way of expressing themselves or don't want to talk to their teacher about what's going on," she added. "We wanted something that would offer tailored information and be quick and easy for them to access when and where they need it."

UK wide expansion
Although the app is only available for people in London at the moment, there are plans to launch it in other cities throughout the UK.

The team also has plans to add some more interactive features such as a mood tracker and a medication reminder.