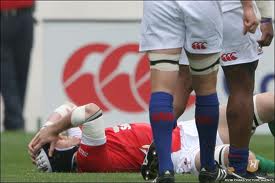 As research reveals a link between head trauma in sport and early onset dementia, digital editor Richard Hook looks at why those in charge of athletes need to act decisively to reduce mental health risks:

May 1994, Formula 1 legend Ayrton Senna dies as a result of a crash at the Imola circuit prompting the sport's governing body, the FIA, to make the largest overhaul of safety standards in its history. Nearly 20 years on and there have been no further deaths despite a number of major crashes while the sport is more popular than ever.

August 2013, Dr Willie Stewart identifies head trauma in rugby as a potential cause of early onset dementia in one or two players per year. Now the question is whether this sport's governing will act as decisively in the face of a potentially life-altering safety risk?

Physically and mentally, sports can bring out the best in people and help develop good habits and enhance wellbeing. But if an athlete is injured the chances of their finding maximal bliss from their sport is significantly hindered, if not demolished completely.

People fall down stairs and break ankles and clank heads for no apparent reason. A lot of seemingly easy physical tasks end in painful and lasting injuries for people of all fitness levels, but a long-term mental illness is not a risk most athletes will consider before taking part.

The new research by neuropathologist Dr Stewart should prove a massive eye-opener for all athletes and, more importantly, sports rule makers.

There is an increased body of evidence linking head trauma to early onset dementia, and in physical sports, such as rugby, it is not an uncommon sight in rugby to see players being concussed, knocked out or sent dizzy and then either jumping back to their feet and playing on or going to the sidelines then wandering back.

Now, this latest study has found compelling evidence to suggest that a head injury is just as good a reason – if not better – to pull a player out of a game than a physical injury, such as a torn hamstring, in a number of sports, including rugby, American football and ice hockey.

However, the mentality of many elite athletes, particularly in rugby, is to play on until they physically can't stand.

As sports psychologist Dr Samantha O’Connell has said: "The problem with athletes, especially those who are paid professionals, is that their entire identity is wrapped up in the concept of being an athlete.

"Along with their self-identity being solely linked to athletics, some people’s livelihoods are dependent on playing sports because athletics are the only talents they have cultivated. As such they are unwilling to admit to psychological or emotional pain and are willing to play through it despite the increased risk to themselves."

Therefore, authorities such as the RFU owe a debt to those that have made their sport great to protect their long-term health through the enforcement of safety rules & regulations.

Dr Stewart is spot on when he said: "There is a risk that a second head injury, coming within a short space of time and before the brain has properly recovered, can be much more severe and cause more problems and more symptoms.

Such a move has been made by the NFL in America, with the death of three-time Superbowl winner Junior Seau from brain-related injuries (chronic traumatic encephalopathy) at the age of 43, a major driver of new regulations forcing players to miss two weeks of action if they suffer head trauma.

Let's hope it doesn't take a similar incident in this country to encourage governing bodies to take a hard stance against this risk. It would truly be a shame to see any of the players who led Britain to a famous Lions triumph in Australia to have their own memories of that victory diminished by an avoidable mental health illness.