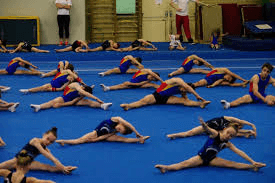 Many elite gymnasts are preoccupied with weight and body shape and score well above average for eating disorder symptoms, according to new research.

Professor Mike McNamee and clinical associate professor Jacinta Tan from Swansea University, who carried out the study funded by the Economic and Social Research Council (ESRC), are calling for reforms to improve the welfare of elite gymnasts.

Their recommendations include a review of how frequently gymnasts are weighed and warn that more than once a week can encourage them to fixate on their weight.

With the Commonwealth Games, which begin today [24 July], containing 20 competitive events for gymnasts, the researchers hope to highlight how putting gymnasts under intense pressure to win medals can lead to eating disorders with serious physical and psychological consequences.

Switch eating habits on and off
However, Prof McNamee from the Applied Ethics faculty at Swansea University says it is important to put the findings in context and that weight control is a necessary and deliberate strategy to achieve medal success in some elite sports.

"We found it problematic distinguishing between abnormal eating-related behaviour and behaviours used as a strategy for sporting success," he said.

"Some gymnasts even felt they could switch on their eating habits in the period running up to and including competition, but then switch them off in their breaks from training, or after retirement."

Strong pre-occupation with weight
The study is one of the few ever carried out into eating disorders in top-level athletes and was carried out in partnership with British Gymnastics, the UK governing body for the sport.

The researchers asked young male and female gymnasts to complete anonymous questionnaires on eating behaviours and wellbeing. Many reported a strong pre-occupation with weight and mild depressive symptoms. However, the gymnasts had high levels of self-esteem possibly because they were enjoying success at a young age. Coaches were also interviewed as part of the study which focused on tumbling, rhythmic and acrobatic gymnasts.

The researchers identified a significant "paternalistic" culture among coaches, with gyms acting as surrogate families for athletes, although coaches appear to know little about nutrition or eating disorders.

Dr Tomlinson, a senior sports physician and chief medical officer for British Gymnastics, said: "It is important that those involved in the sport have a good awareness about the risks, and the British Gymnastics Medical Team has developed a pathway of care for any elite gymnast who develops an eating disorder."

Attitudes towards weight also varied between different types of gymnasts. For example, acrobatic gymnasts work as a team with the person at the top light and those at the bottom strong, yet rhythmic gymnasts are penalised by judges if they are not very lean and slender.

Ethical obligation to young people
Females displayed more symptoms of eating disorders than males because of the constant focus on body shape.

Psychiatrist Dr Tan, from Swansea University’s College of Medicine, said the need for gymnasts to watch their weight was a concern especially when this involved children.

"There’s an ethical obligation to give young people who suffer harm as a result of their sporting sacrifice and commitment to receive appropriate monitoring and care if the nation wants to continue to see its athletes winning on an international stage," she explained.

The researchers made several recommendations for those working to develop sport policy and improve the welfare of elite gymnasts. These include:
• Greater awareness among doctors, coaches, parents and athletes of the risk of eating disorders and how to deal with them. Funded referral and assessment for all athletes affected
• Monitoring of height, weight and maturation of young athletes. Policies are necessary if they are shown to be below average.

British Gymnastics said it welcomed the report although Dr Tomlinson emphasised that most elite athletes pursue the goal of ‘optimal body composition,’ not just gymnasts.