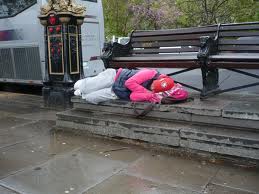 Prime Minister David Cameron has been called upon to act to address the scandal of people with mental health problems sleeping rough, as new statistics show a significant increase in the numbers of people living on the streets.

Homelessness charity St Mungo’s has also produced research, which shows that the number of people rough sleeping with a mental health problem is also rising and that 61% of staff working in homelessness services say rough sleepers can’t access the mental health services they need.

For the research St Mungo’s surveyed 225 street outreach staff across all English regions about rough sleeping and mental health problems. The survey also found that 78% of respondents said that in the last 12 months they had met at least one person sleeping rough who had recently been discharged from a mental health hospital. In addition, 44% of respondents said that the number of people who sleep rough soon after being discharged from a mental health inpatient service is increasing; only 7% said it was decreasing.

The charity is asking people to sign an open letter to the Prime Minister urging him to build on his previous commitments to tackle rough sleeping and enhance mental health services for all those in need.

Howard Sinclair, chief executive of St Mungo’s, said: “Few would disagree that it’s nothing short of a scandal that people with mental health problems are sleeping rough. Not only that, but this incredibly vulnerable group are more likely to remain in dangerous and unhealthy situations for longer. The very real concern is both the shocking, unprecedented rise in people who are sleeping rough, and evidence that more of this group are struggling with poor mental health.

“We are asking the Prime Minister to lead a new, ambitious national rough sleeping strategy which ensures that government departments and the NHS work together. It must deliver mental health assessments and professional support to people on the street, specialist supported housing to help their recovery, and the right support so people don’t end up sleeping rough after leaving mental health hospitals.

“The Prime Minster must show leadership to protect our most vulnerable and help transform life chances, with more funding for specialist homeless mental health support and a strong safety net at the heart.”

Patrick slept on the streets of London for 18 years before being helped by St Mungo’s. He said: “When I became homeless I was in a very dark place due to a traumatic experience in my past. I started using substances to forget about what happened to me and cope with the severe anxiety and loss of confidence I faced. It was after that I stayed in a St Mungo’s hostel. I isolated myself, I’d had enough, and they offered me talking therapy, psychotherapy. I had never told anyone what happened to me before. If it wasn’t for St Mungo’s, I’d probably be dead by now.”