Almost a quarter of MHT survey respondents were most concerned about xenophobia, with hate crime rates rising by a third in the UK since the 2015 vote.

The potential impact on personal finances is the biggest Brexit-related mental health concern for Mental Health Today readers, an online poll has found.

Readers were asked whether exiting the European Union was a source of anxiety and what their biggest worries were.

Over a third (37 percent) said fears over what the exit might mean for their financial situation were playing on their mind.

A “no deal Brexit” could result in house prices falling by a third, sparked by a fall in the value of the pound and rising unemployment, inflation, and interest rates, Mark Carney, the governor of the Bank of England, and Philip Hammond, the Chancellor have reportedly privately warned Government ministers. 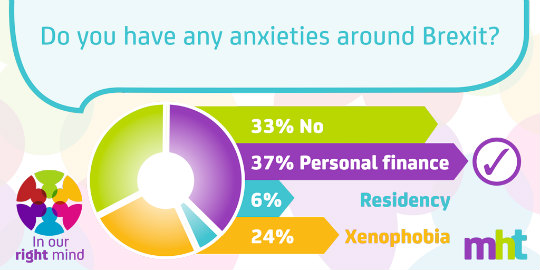 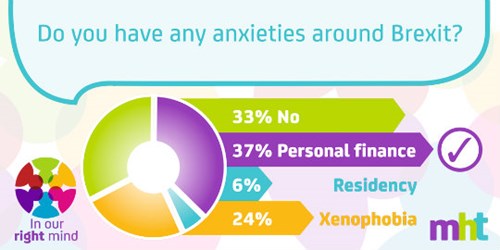 Almost a quarter (24 percent) were concerned about xenophobia, with hate crime rates rising by a third in the UK since the 2015 vote.

Just six percent expressed anxiety about residency status, which is likely to be unaffected during a two year transitional phase, beginning in six months.

A third of respondents (33 percent) said they had no anxieties around possible implications associated with Brexit, scheduled for March 29, 2019.

147 people voted in the Twitter poll, conducted by @mhtodaymag between September 7-14.

Readers also highlighted anxiety around access to mental health medication following the vote, with one reader describing the possibility as “terrifying”.

NHS Chief Executive Simon Stevens said last month that “extensive” planning is taking place to prepare for the event of a no-deal scenario.