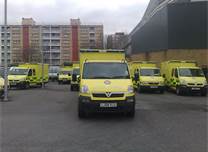 Long hours, staff shortages and the mental demands of the job are placing an enormous burden on ambulance workers as 91% say they are suffering with stress, according to a new UNISON survey.

The survey of 2,977 ambulance workers revealed that three quarters (74%) are experiencing sleep problems, 72% said they felt irritable as a result and experienced mood swings, and 56% suffered with anxiety.

In addition, 38% said they had to take time off sick because of work-related stress and a 26% admitted they were close doing so.

One paramedic described how hospital closures meant they now had to drive hundreds of miles every day. He said: “Too few ambulances, missed meals and 16 or 17 hour shifts would stress anyone.”

Another ambulance worker, who has not taken a day off sick in 10 years, said he was about to ‘explode’. Others described being tearful, suffering with migraines, post-traumatic stress disorder and feeling exhausted.

UNISON’s survey also revealed that many ambulance workers are keeping their mental health issues from their employers. For instance, 58% admitted they did not tell their employer the reason they were off sick was stress and only 6% said they would talk to a manager or a supervisor to cope with stress.

Turning to friends and family was the most commonly mentioned source of support (63%) and 52% said they talk to their peers in an attempt to cope.

As a result of pressures on the service and workers, 4 in 5 (82%) admitted they had thought about leaving the job.

UNISON is concerned that employers are not fulfilling their duty of care as more than half of the respondents said they were unaware of any steps being taken by their employer to remove or reduce stress.

More than two-thirds (69%) said their employer did not support a good work-life balance and 40% admitted they might need to take time off if the situation did not improve.

“It is unacceptable that the current system doesn’t allow for proper breaks between shifts. Workers have told us they often work 14-hour shifts without a decent break.

“Higher call out rates and lengthy waits outside A&E departments are adding to the problem. It is clear that the pressure caused by government funding cuts is having a huge impact on staff and on patient safety. But it is vital that patients use the service responsibly, for example only calling 999 for an ambulance when there is a real emergency.

“This confirms the findings from the NHS staff survey that shows much greater pressure on staff in the ambulance service than any other part of the NHS.

“The pressure on workers is mounting and the apparent lack of support from their employers means they are suffering in silence. Year after year the levels of stress remain unacceptably high and yet neither employers nor the government have done anything to address this. It is no wonder areas such as London are now having to go to the other side of the world to recruit paramedics."

Emma Mamo, Head of Workplace Wellbeing at Mind, said the data revealed a “worrying scale of stress” among ambulance workers.

“Our ambulance workers play a vital role in society and do an incredibly challenging role, day in, day out,” she said. “When times get tough it’s vital that there are measures in place to support them. But the high amount of respondents experiencing stress, stress-related sickness absence and considering leaving their jobs because of the pressure all indicate that there isn’t currently enough support to help our paramedics stay well.

“Last month Mind launched its Blue Light Programme with £4 million funding from the Cabinet Office. Over the next year we will be supporting emergency services staff and volunteers across ambulance, police, fire and search and rescue personnel with tailored programmes of support. The Blue Light Infoline is now available and offers dedicated information and support for emergency service staff, volunteers and their families. As well as increasing support for staff, we also want to see employers take responsibility for staff wellbeing. Organisations can show their commitment to prioritising staff mental health by signing the Blue Light pledge.”