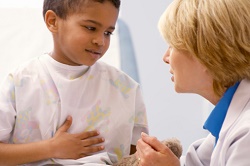 Less than half of parents and carers of children with a physical disability, mental health needs or a learning disability feel that staff definitely know how to care for their child’s individual needs according to the first national children’s survey.

While the “vast majority” of children who stayed in hospital overnight or were seen as a day patient were satisfied with the care they received, hospital stays are failing children with learning disabilities and mental health needs, the major new report by the Care Quality Commission has suggested.

Symptomatic of a wider problem
Jolanta Lasota, CEO at Ambitious about Autism said the findings were symptomatic of a wider problem regarding the understanding of special needs: “A hospital experience is traumatic for any child but it is even more so for those with special needs. A good understanding of the nature of learning disabilities such as autism is vital in knowing how to treat someone on the autism spectrum. Factors that might not be taken into consideration for others, such as sensitivity to physical contact, bright lights and loud noise, can all be extra factors that make a hospital experience more traumatic for those with autism.

“Parents and carers know their child better than anyone else so it is disappointing to see they don’t feel the understanding is there from those who look after their children. This is representative of a wider need for more understanding of the needs of those with special needs. Educating staff is the first step in solving this issue and we urge government to address this problem.”

Additionally, responses were less positive across all areas that involved children with mental health conditions, learning or physical disabilities, compared to the children and parents or carers of children without these conditions.

Commenting on the findings, Professor Edward Baker, CQC’s Deputy Chief Inspector of Hospitals, said:“There is much to celebrate in our first survey to ask children and young people about their care.

“Nationally, most young people and children said they were happy with their care, are able to understand the information given by staff following an operation or procedure, and that they have confidence staff are doing everything they can to manage their pain.

“However, there is marked variation between the results from individual hospitals. We have now inspected the majority of children’s hospital services in England, and those inspections have also shown marked variation in the quality of care provided.

“We’re encouraging more children and young people to share their experiences of care with us, and along with our inspections, these are crucial to help drive improvements in the quality of children’s services.”