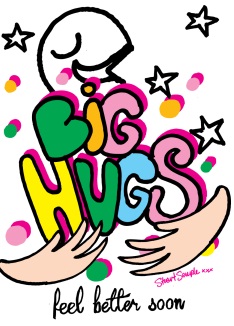 me of the UK's top contemporary artists have created an exclusive range of 'get well soon' cards in support of England’s biggest mental health anti-stigma campaign.

The cards made for Time to Change aim to encourage people to be more supportive of someone experiencing a mental health problem. Research found that only 1 in 4 people who have experienced a mental health problem have received a get well card during their illness, even though 80% say that a card would be a good way for others to let them know they are thinking of them.

Artist Stuart Semple and cartoonist Stephen Collins have created the artwork that will be used as part of the Time to Change campaign, alongside advertising running throughout February.

"There is still so much silence around the subject of mental health, yet it’s something that can affect all of us at some point in our lives," explained Semple. "People don’t seem to receive get well cards when they have a mental health problem and it’s a shame that it’s still such a taboo subject. Whether it’s a note of support, or just reminding someone you care, these small things can make a big difference."

Every year, millions of cards are sent to support friends and family members when they’re unwell. Yet, while 79% of the public would consider sending a card to someone with a physical health problem, only 50% would do the same if it was related to mental health, with around a third saying they wouldn’t know if it were "appropriate".

The cards set out to further highlight the differences in how people approach conversations on physical health problems compared to mental illness.

Illustrator Collins, best known for his cartoons in the Guardian and Prospect magazine, added: "The idea behind my design is how people experiencing depression often say they feel like they're “underwater”, with the normal world going on above, so I wanted to create an optimistic image based around that.

"As one in four people experience a mental health problem in any given year, it is something we should all become more open about so that we can help those around us who need our support."

Sue Barker, director of Time to Change, hopes that the cards can help to show that people with a mental health problem should receive the same level of support as those with physical health concerns.

The new card designs are available as downloadable e-cards on the Time to Change website. To order go to www.time-to-change.org.uk