It is only through amplifying the experiences of minority groups that mental health care progresses. 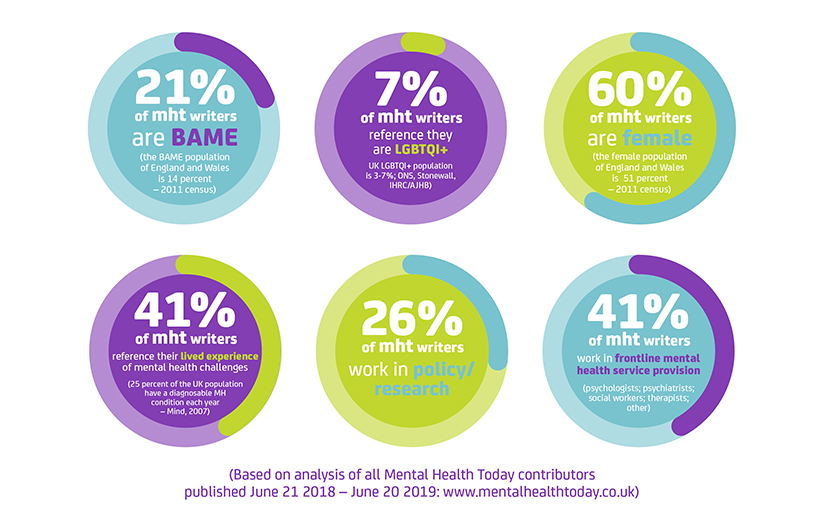 It is important to us at Mental Health Today that we play our part in amplifying voices that have historically held less power than others, in both mental health care and the media.

We regularly witness individuals being told to define themselves exclusively by whether they are a service user or a service provider; a professional or a patient; a carer or someone who is cared for. Most of us know that it is of course possible to be all or neither. Either transiently or on an ongoing basis.

Just ask your local GP: forty percent of doctors have experienced a mental health condition such as depression or bipolar disorder, the charity Mind revealed last year. This doesn't prevent some outlets from continuing to gate-keep which perspectives should be heard, however.

Our review found that 21 percent of our writers are BAME (Black, Asian, Minority Ethnic). This is seven percent higher than the BAME population of England and Wales and important in the context of Britain's tradition of disproportionately detaining ethnic minority groups, or enforcing community treating orders.

It wasn't so long ago that sexuality would be "treated" on the NHS, while gender dysphoria was only removed from mental disorder directories this year. ACE questionnaires used by social workers continue to make assumptions of the sexualities of our parents.

It is only through amplifying the experiences of minority groups that mental health care progresses. That and establishing data to demonstrate inequalities - which is why we have also been monitoring the amount of space we give to authors working in research and policy.

Are you the next Mental Health Today writer? We want to hear from you. Pitch us via info@pavpub.com or reach out to us on Twitter.