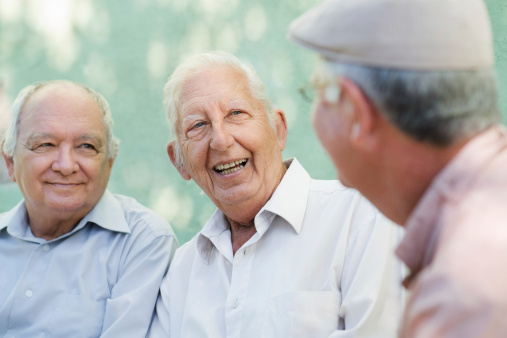 Social isolation can be a big issue for people with dementia, but local grassroots initiatives can really make a difference and help to improve the quality of life of people with the condition. Andrew Mourant reports:

Peter Smith is on a crusade: to make Yorkshire a more dementia-friendly place. The former logistics worker is lobbying everyone from Leeds City Council to the Yorkshire Building Society (YBS) to do more for people with dementia, and has helped to set up several initiatives in the area to help improve the lives of people with the condition.

Smith’s dedication to the cause has a personal root. “My mother had vascular dementia – she used to get very aggressive and knock me about,” he says.
Witnessing her decline led him to joining the Alzheimer’s Society and working for them after a 40-year career with Menzies Distribution. Having seen the effect it can have, he now wants to make life better for other people with the condition.

One of the initiatives Smith has set up is the Tea Cosy Memory Café in the former coal mining town of Rothwell. In the three years since it was established it has become a regular meeting place for people with dementia in the town to come together and socialise.

With isolation a major concern for people with dementia, things like the Tea Cosy Memory Café can be a lifeline. The Café is held for three hours on the first Saturday of every month in a local church, and for £2 visitors get a cooked breakfast, as well as the opportunity to take part in activities including a raffle, bingo, quiz and fundraising table-top sale. Smith has also worked with Leeds United to establish sessions at the Corner Flag Café, a social initiative from the football club where people with dementia and their carers can re-live sporting memories. Leeds United Foundation also plans to visit care homes and community centres in the area, showing film highlights of the club’s glory days.

In addition, Smith has been talking to bigger players in the local area, including Leeds City Council and the YBS to encourage them to make the county more dementia-friendly. YBS already gives Tea Cosy financial support – and has done since 2012 – and staff from its local office attend support group sessions in a community capacity. Smith feels he’s making headway. Another idea gaining ground with the council is creating special areas in the city’s parks: secure havens with benches and everything well-signposted. To this end, Smith recently addressed the massed ranks of Leeds City Council’s park staff about his vision, and a prototype is planned for a walled area at Springhead Park, Rothwell. A landscape architect is on the case though no date for completion has been fixed.

“We’re committed to it but we haven’t any money so we’re seeking sponsorship – perhaps in kind from a fencing company,” says parks and countryside services outreach manager Emma Trickett.
How might it look? Probably an area of bold colours and signs, enclosed so carers or relatives can relax without fear of their charges wandering off, says Trickett. Leeds City Council is being guided by Stirling University’s dementia centre about such things as colour use; installing hand-rails and including plants with sensory appeal, such as scented or ones that make interesting sounds like rustling bamboos and grasses. “If Springhead is successful, we’d like to roll it out elsewhere,” Trickett adds.

Down the pub
Last year, Smith’s Tea Cosy Café initiative struck a chord with Mark Collin, landlord of the Hare and Hounds pub in Rothwell. Collin’s starting point, as with Smith, was seeing the ravages of dementia first-hand: his grandparents both had the condition. He now puts on sessions every Monday afternoon in a similar vein to the Tea Cosy where those with the condition – alone or with carers – can enjoy coffee, cake and a chat.

When the afternoons are in full swing, Collin will put records from the 1950s and 1960s on the jukebox, which can be a great catalyst for triggering pleasurable reminiscence. “Some weeks we get a dozen people coming in; some weeks up to 20,” he adds.

Sights as well as sounds can rejuvenate memory – the pub has a log fire, which is a magnet for some among the Monday crowd “who tell me how to light it,” laughs Collin. It’s thought that the Hare and Hounds – or Care’n Hounds, as it becomes each Monday afternoon – is the country’s first pub to accommodate such sessions. As such, says Collin, it’s a “drop in the ocean” in terms of accommodating people with dementia. But there are others seeking to building on this work.

For instance, Alec Shelbrooke, Conservative MP for Elmet and Rothwell – who has also witnessed the effects of dementia at close quarters – is arranging a constituency-wide dementia summit for February 2015. Shelbrooke would like other MPs to follow his example. He’s trawling for community projects “and advice from far and wide… the summit’s aimed at people having to cope with dementia,” he says.

Play for today
Meanwhile, in Leeds the West Yorkshire Playhouse is also doing its bit, building on work that grew out of its ‘Heydays’ programme for the over 55s, offering dance, drama, visual arts and creative writing.

“About five years ago, I noticed some people beginning to experience changes associated with memory problems,” says Nicky Taylor, Playhouse’s community development officer and a member of Leeds Dementia Action Alliance. “So we ran a much smaller programme targeted at dementia sufferers and their partners. It was very joyful… positive… and gave them something outside the cared-for/carer relationship.”

West Yorkshire Playhouse has pushed forward its projects thanks to a £100,000 grant from independent grant-making organisation the Paul Hamlyn Foundation. For the first time, the company is putting on a special dementia-friendly version of a major winter production, Irving Berlin’s White Christmas.

“We’ll work on things such as staff support – there’ll be front of house changes… a quiet area where people can go,” says Taylor. “And technical adaptations – [changes to the] lighting and sound. We’ll have flexible seating arrangements... [so] if people request that the seat next to them isn’t sold, then it won’t be; and if some want to walk around during the performance, they have that option.”

Meanwhile, Playhouse members have been singing songs from the show with people with dementia so that they’ll know what to expect. “We’re working with the performers – to make sure they’re aware of the sort of responses they may get,” adds Taylor.

Scenes from the early storyline, where the two main characters meet in battle during wartime, will be modified, she says. “It’s designed to be unsettling [in the original], so our production will be softened at the edges. We make our own shows and any feedback will help us plan for the future. We’ll learn a lot.”

Such enlightened thinking can make all the difference to the quality of life for people with dementia. Shelbrooke hopes to uncover more of the same and some of the best examples may one day feed into government policy for dealing with the welfare of people with dementia.

“My grandmother had Alzheimer’s disease and I saw my father age 10 years in two trying to deal with it,” he says. “There was no support network outside the family – a scheme like Tea Cosy Café was something my father didn’t have.”

About the author
Andrew Mourant is a freelance journalist
This article first appeared in the November/December 2014 issue of Mental Health Today. For more information on the magazine, and details of how to subscribe, click here.