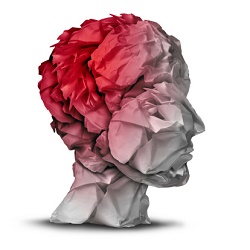 A non-invasive treatment that stimulates nerves through an electrical impulse many help patients with post-traumatic stress disorder (PTSD) and major depressive disorder (MDD), a new study has suggested.

The technique, called External Trigeminal Nerve Stimulation (eTNS), was delivered to 12 patients who used a device nightly for 8 weeks. Patients experienced significant improvements in symptoms related to PTSD and depression, and scores related to quality of life increased.

After four weeks, the subjects’ scores on the PTSD and the HDRS-17 declined by an average of nearly one third. By week eight, their scores were cut roughly in half in both assessments. This meant that eTNS yielded a significant, measurable improvement in each patient’s chronic symptoms of MDD and PTSD within just two months.

The researchers from UCLA hope to use the non-invasive therapy, designed to deliver neuromodulation without the risk of invasive devices or electrodes placed in the brain in particular to tackle mental health issues among US military personnel.

Senior author Dr Andrew Leuchter said: "We’re talking about patients for whom illness had almost become a way of life.

"Yet they were coming in and saying, ‘for the first time in years I slept through the night,’ or ‘my nightmares are gone.’ The effect of this wearable device was extraordinarily powerful and rapid."

Dr Leuchter says his team are now running a larger trial and are "augmenting the treatment of 74 military veterans in the Los Angeles V.A. hospital system".

If these larger, more rigorous trials can establish that eTNS brings statistically significant improvement to large numbers of patients, Dr Leuchter hopes to get the treatment introduced as a standard measure for people in the US who experience PTSD and MDD.
email this article
...