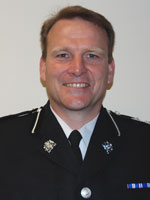 The College of Policing has launched a consultation on new guidance covering the management of people who have been detained.

The document looks in particular at procedures for dealing with those placed in custody – but not arrested - using the Mental Health Act, as well as recommending that any such decision is reviewed by a superintendent. The guidance also recommends that ‘standard data’ should be collected on the use of force on those who are being detained.

Speaking of the changes, national policing lead for criminal justice, Chief Constable Chris Eyre (pictured) said: “This consultation will help us reflect changes in technology and legislation, as well as capture lessons learned from IPCC investigations.

“While use of force is recorded in each individual case, introducing more standardised reporting across the country will help to build an overall picture.”

College of Policing lead for criminal justice, Superintendent Ian John, said: “It is not just the volume of those detained which makes the custody environment complex. A significant proportion of detainees - up to 30 per cent - will need to see a medical practitioner, and approximately one in five detainees is a child or young person.

“This is an incredibly challenging area of policing and we want to ensure that our revised guidance provides the very best support to protect the safety of the public, as well as police officers and staff.”

The consultation closes on August 12 of this year.