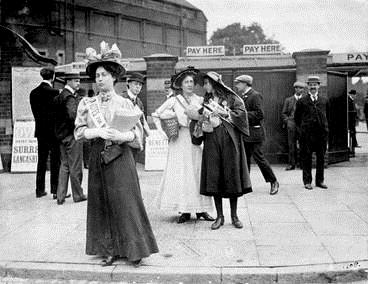 The theme of this month's Shuffle – named after the anti-psychotic drug Largactil, which can have physical side effects including a distinctive shambolic gait – is 'Revolutionary Women'.

The walk will pass through Ruskin Park and Myatts Fields and across boroughs for talks on local suffragettes and revolutionary women from Southwark and Lambeth.

CTA’s communications officer, Emma Thatcher, said: "It is a century since the suffragette activist Emily Wilding Davison was killed when she stepped in front of the King's horse at the Derby and we will be stopping for short talks on the suffragette and Britain’s first professional landscape gardener, Fanny Wilkinson; the writer, philosopher and advocate for women’s rights, Mary Wollstonecraft; and Alice Chapin, a suffragette who poured chemicals into ballot boxes to disrupt a Southwark by-election."

There will also be talks on Olive Morris, who set up the Brixton Black Women’s Group, and two pioneering nurses, Florence Nightingale and Mary Seacole. Participants can also placing special 'Blue Plaques' at Revolutionary Women’s sites along the way to acknowledge Southwark's Women's Herstory.

The walk, which will start at 11:30am from the Maudsley Hospital and end at The Feminist Library at about 4.30pm, is free to join but voluntary donations are welcomed. For more information visit www.cooltanarts.org.uk.