Mental health lessons are coming to the national curriculum next year. Teachers should be empowered to acknowledge that mental health is a contested area, argues psychologist and lecturer Anne Cooke. Ask students what they think, encourage critical thinking and enquiry...

Darn, I missed the boat. The government’s consultation on its new proposal for mental health education in schools closed in November, and I didn’t know it was happening. Am I alone in thinking that consultations are often too perfunctory, too brief, and only ask the questions to which the government thinks it already knows the answers?

I’m disappointed, because while many of the proposals are great, the stuff on mental health begs some important questions. Including the big one: what does ‘mental health’ actually mean?

What is a mental health problem? Are some of us mentally well and others of us mentally ill - because something has gone wrong in our brain that needs fixing by an expert? Or are we all just different, with different experiences, different areas of strength and difficulty, and all, at any one point in time, somewhere on a spectrum of wellbeing? And, if, as they do, experts differ in their views on these questions, what is ‘mental health education’ actually educating students about? That we all experience distress and need to look out for each other?  Or that we need to be alert to signs of an underlying disease process and refer to the experts?

The draft guidance suggests that school pupils should be given ‘factual information about the prevalence and characteristics of more serious mental health conditions’, and ‘should be enabled to judge whether what they are feeling and how they are behaving is appropriate’.

I always feel a bit wary when read statements like that. The problem is: mental health is a contested area. Scientists and clinicians don’t agree about what the ‘facts’ are, or about what is ‘appropriate’.

Let’s take a problem so prevalent that it’s often called ‘the common cold of psychiatry’ - depression. What are the facts? If you believe some medical or pharmaceutical websites, ‘depression is a disease…. the levels of certain brain chemicals are thought to be out of balance’. The patient information leaflet for the drug Prozac states that ‘people who are depressed…have lower levels of serotonin (a brain chemical) than others’, implying that that is the cause of the depression.

However, not all experts take that view. For example the British Psychological Society’s forthcoming publication ‘Understanding Depression’ suggests that ‘depression is best thought of an experience, or a set of experiences, rather than as a disease… calling it an illness is only one way of thinking about it, with advantages and disadvantages. For most of us, depression is unlikely to be the result of an underlying biological disease process or chemical imbalance’.

In his recent bestseller ‘Lost Connections’ author Johann Hari argues: ‘If you are depressed and anxious, you are not a machine with malfunctioning parts. You are a human being with unmet needs’. Organisations like Psychologists for Social Change emphasise the role of our social and political environment, particularly austerity policies. So the idea that depression is an ‘illness like any other’ caused by low serotonin levels is just that, an idea. There is no direct evidence for it and it remains hotly contested.

[Editor's note, low serotonin levels have been shown to correlate with people experiencing depression, but the point often missed is that low serotonin levels are themselves caused by something, and are neither a random event nor have they been demonstrated to be linked to family genetics.]

The controversy extends to so-called severe and enduring mental illnesses like ‘schizophrenia’. As the British Psychological Society’s report ‘Understanding Psychosis and Schizophrenia’ explains: ‘Hearing voices or feeling paranoid are common experiences which can often be a reaction to trauma, abuse or deprivation. Calling them symptoms of mental illness, psychosis or schizophrenia is only one way of thinking about them, with advantages and disadvantages’.

In the face of such disagreement among the experts it would be tempting just to avoid talking about mental health altogether. Indeed, our own research with primary school teachers suggested that conversations about mental health were almost entirely absent from their classrooms. The topic made teachers anxious. They felt the need to protect children from exposure to people with mental health problems and even from information about the topic. They also believed they lacked the necessary expertise, worried that such discussions were outside their remit, and were anxious about parents’ reactions.

I agree with one of MHT's five visions for the curriculum: be honest about the unknowns. Start with one of the few undisputed facts: that mental health is a contested area. Discuss different experiences – feeling low, feeling anxious, hearing voices, harming yourself and so on – without imposing a particular framework of understanding. Acknowledge that there are different views and that different people experience these things for different reasons. Ask students what they think, encouraging critical thinking and enquiry. Vitally, involve in the classroom people who have themselves experienced mental health problems. That’s the best way of fulfilling the third stipulation in the guidance, namely reducing stigma. Incidentally, it seems that part of what drives stigma in the first place is this idea of mental health problems being scary brain diseases, so opening up the conversation can be helpful there too.

I was involved in a project which provided training on this basis in London, as did my colleagues Catherine Sholl, Juan Korkie and Dave Harper in secondary schools. I’ve included a couple of our slides so you can see the approach we took. It’s also the approach taken in Psychology, Mental Health and Distress, the first textbook of mental health to take its contested nature as a starting point. 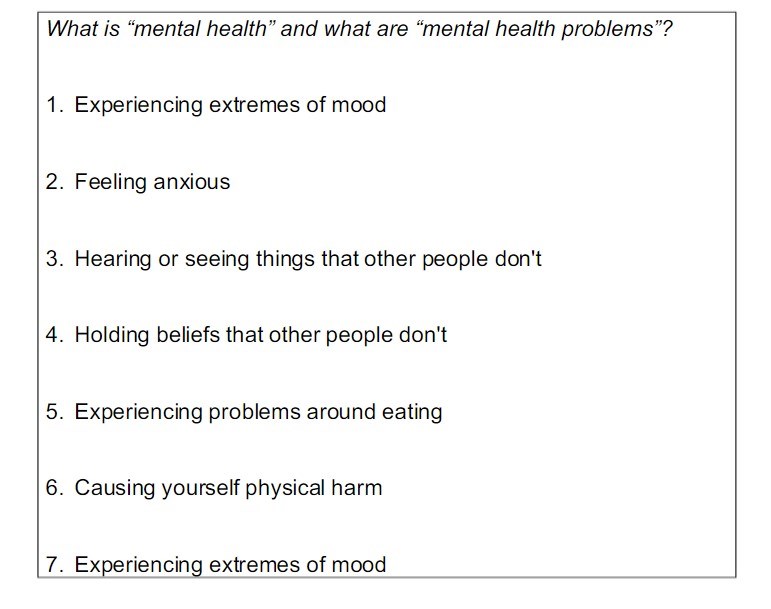 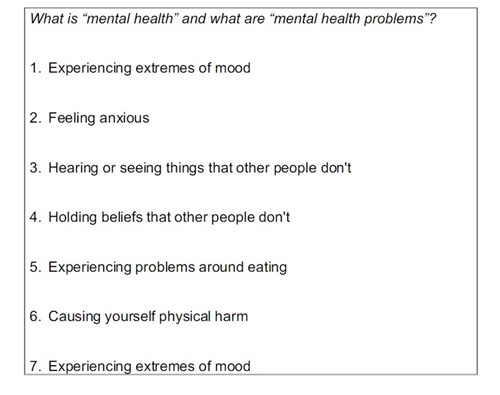 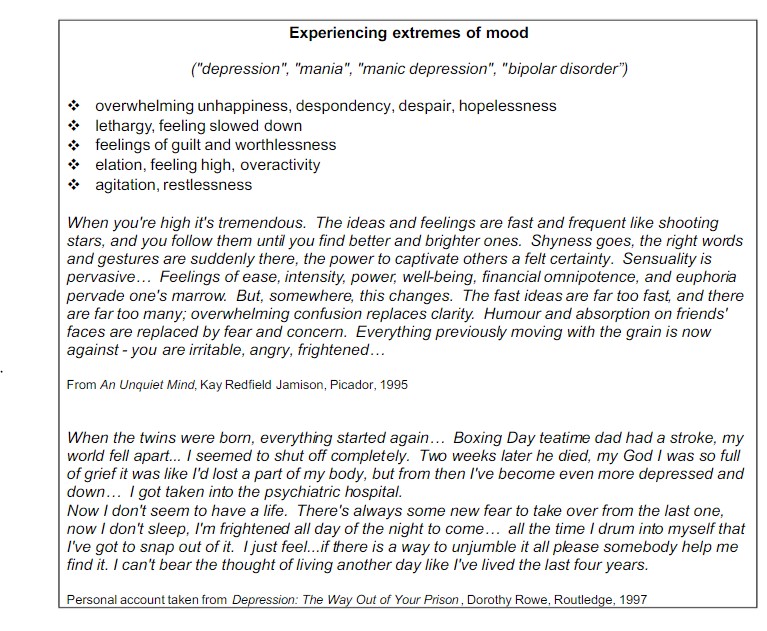 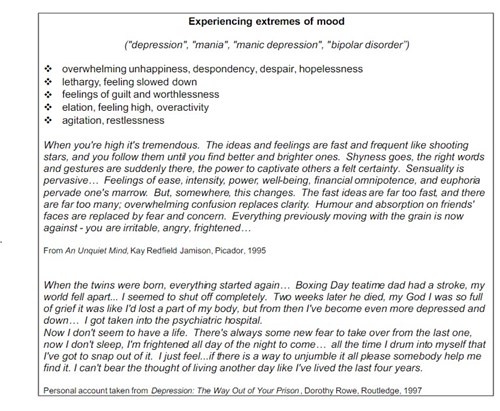 The other area where there’s more agreement is what can help maintain and protect mental health. This can sometimes get lost if the emphasis is on looking out for ‘warning signs’ – the ‘spot the symptom’ approach doesn’t say much about what we can do to help ourselves except consulting professionals.

Despite the name, I’d argue that this is a danger with some ‘Mental Health First Aid’ approaches. However, including the New Economics Foundation’s ‘Five Ways to Wellbeing’ in the curriculum would be a good place to start, as would learning about some of the (normal) psychological processes that can contribute to mental health and mental health problems.